I got to travel to Berlin, as part of the Blockstack conference: a thing all about the blockchain and decenralised apps. Basically a new Internet for paranoid nut-jobs. I can say that now, as I'm no longer involved in the project.

It snowed this morning, and looked like it might be tricky to get to the airport. Thankfully I got picked me up early so we could get there in plenty of time.

Before leaving, I’d got my submission sorted for the British Podcast Awards (Best New Podcast... hah!) and tried to do a little more deleting of old files from the Podiant backup space.

My ride rolled up a little before 2, and got me to the airport with loads of time to spare. The FlyBe checkin process was still a nightmare, but I finally got my bag paid for and on its way, and sat at the departure gate, journaling for a bit.

The flight was fine. I spent most of it in a succession of micronaps, jerking awake every few minutes. But the nearly-two-hour journey flew by. Aha.

Getting from the terminal to the hotel was a different matter. I wandered around for ages trying to find the right pickup point for an Uber, and eventually went back to my original spot where the guy - with the aid of a member of airport staff - found me. The journey to the house was pretty short and painless, and I was met by J, E and B as I explored the bonkers apartment we’ve got for the next few days. 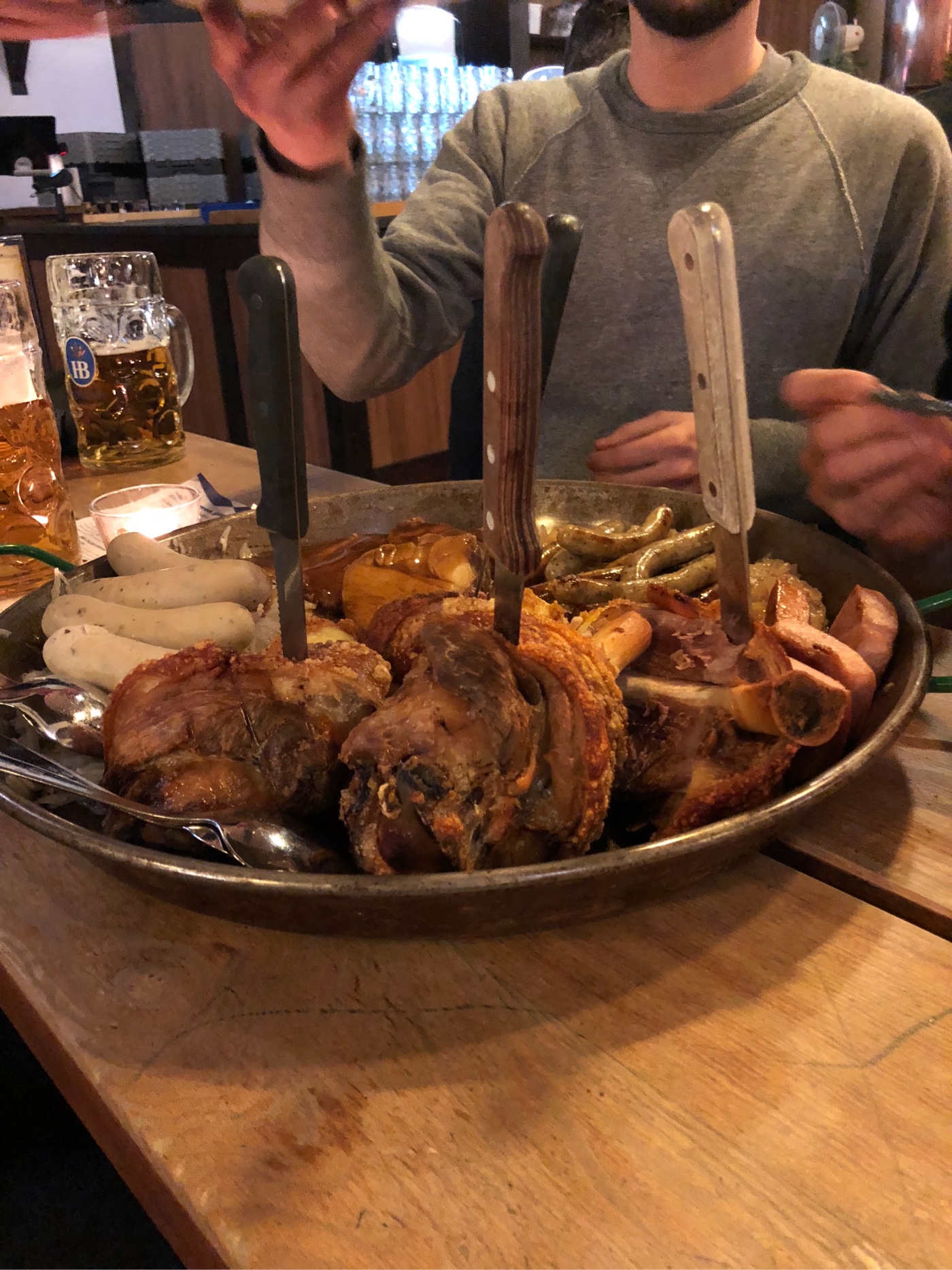 After settling in briefly, we Ubered to a traditional (touristy) beer hall where they dance and play loud music, serve massive steins of generic beer and offer up huge sharing platters of meats. They were good meats.

We then walked back to our apartment, via a hacker bar called C-Space, which looked fairly cool at midnight but which I’d quite like to see in the evening.

Today was largely a get-things-done day. Tomorrow there’s a sound check thing that some of the team need to be prepped for, and there were a few things we wanted to get straight before the presentation.

A few of us went for breakfast in a nice little French place. Service was very slow but the food was nice enough, and the coffee was very good. We worked until the evening, when we then went to a dinner thrown by the company we were partnering with.

I was already not really feeling the vibe when we sat and two of the team decided to split up, leaving me and the other chap to talk to whoever sat next to us. Then the waiter announced that all the food served at the restaurant was made to be shared, tapas style, and I just wanted to go home. Honestly, just serve food the way we’ve served it for millennia. Let me order the thing I’d like; let me eat it; let me talk to the people around me, ask how their food is and maybe one or two can swap bits and pieces if they so wish. I fucking hate tapas. Also the food wasn’t good enough to justify the haughty way it was served (apart from the steak tartare, whcih was delicious). The cocktails were decent though.

E and I got stuck - I mean, it wasn’t that bad - with a tech bro who told us all about the amazing physical things he does. He was very pleased with himself, so well done to him.

As this invective might suggest, I didn’t have a great night, and was very happy to be back at the AirBnB, where the dent I’d left in the mattress from last night hadn’t magically mended itself.

After a fairly leisurely morning, we made our way to the conference venue to attend the sound check, and for our presenters to practice their pitch.

We were treated to a test Skype call between the event organisers and Edward Snowden, which felt pretty special. After the boys were satisfied, we found a conference room - that looked like the kind used by the UN - where we worked as quickly as possible on a way to get audio in our app to play “automatically” on iOS. We’d managed to fix it for Safari on the desktop, but mobile Safari was far stricter, so we had to find a workaround, which we did just in time to make a cocktail reception.

From the conference venue we Ubered to the cocktail thing, where canapés were served along with wines. It was another awkward-stand-around thing, but we got chatting to one or two interesting people.

At the end of the night, E and I decided to Uber back to the AirBnB while the other two walked home. We dropped our bags at the apartment and then went straight over to C-Base, where we drank lots more.

This time I was far more receptive to the bar and the people inside it. We got given the full tour by the Swedish bartender we’d been chatting with since our arrival. The place is a lot cooler than I’d given it credit for previously. I think this ended up being the best night of the trip.

When we arrived back at the apartment, we were met by J, and we elected to grab a bite to eat, so found a dirty kebab place, where I enjoyed a diner kebab and fries, in similar fashion to what I’m used to (they either didn’t have chicken kebab meat or didn’t know what I meant).

I have no idea what happened to our glorious leader.

After a big night, I slept in quite late, and nearly missed my morning coffee. The boys were speaking at around 3:30 and the Snowden interview was after lunch, so there was plenty of time to fart around.

As we got there, it turned out there had been a problem with the Elasticsearch cluster powering the player’s search system. Between J and E, it all got sorted with time to spare. We all met up for lunch, and B told us he’d had a possible nibble of investment, so he was quite excited to talk about the possibilities of equity splits and whatnot, and wanted us to start considering reducing our other commitments (he recognised this wouldn’t be easy for me).

The Snowden talk was interesting, and the lads did a great job with the presentation. We ended up with a couple of interested parties between a guy in the room and someone on Twitter, so we’ll see where that lands us.

After the conference, all but our leader went back to the AirBnB for a quick chill and to check flight statuses. Mine seemed OK although E had to re-book his. Within 45 minutes or so we were headed back out to another dinner engagement.

This was pretty much the worst of the lot, in terms of social appeal and actual food. There were some nice-enough canapés and a little wine, but when the dinner turned up it ended up being a fucking buffet which we had to go and serve ourselves from. E and I ended up opposite each-other again, and I got chatting to one or two people, mostly investors (there were a lot of investors around).

I really couldn’t wait for the night to be over, and was flagging for around 2 hours before finally they started kicking us out. J and B went on to something else, so E and I walked back to the apartment where I made sure I was roughly packed, then crashed. I was looking at around 5 hours sleep if I wanted to get up on time and out to the airport, assuming the flight wasn’t going to be delayed due to the snow.

We are not our screw-ups

Saying goodbye to the Leopard

A farewell letter to my company